Star Concert Pianist on the Stage of Hangrózsa A complex cultural experience was offered to the guests who visited Béla Bartók Memorial House on 30th May, 2015. There was held the first public student concert of Hangrózsa Piano School in the concert hall of the museum, on that day, at 11 am. For the price of a museum ticket the audience could visit not only the memorial rooms but the musical productions of child and adult students of Hangrózsa Piano School. The event's rank was enhanced by an invited artist Ivett Gyöngyösi concert pianist who is well known from "Virtuózok" TV show.

The concert was opened by Balázs Juhász, teacher of Hangrózsa Piano School, he talked about the history and goals of the school. A short summary of the memorial house was presented by Ágnes Borbély, she spoke about the composer Béla Bartók who used to live and work in this villa. Bartók lived and composed his opuses here for 8 years before he left Europe and went to America. His Bösendorfer grand piano stays restaurated in the workroom on the second floor, artists are giving concerts in the concert hall evolved on the first floor, on a Steinway model D.
In the first part of the concert the child students presented their knowledge, they played pieces from the popular piano books used in Hungary and abroad. There were performed a small piece by Béla Bartók, from the book "For Children". After children's performance the adult students gave their best, there were played some demanding pieces, e. g. an invention by J. S. Bach and a popular etude by F. Chopin.
After the students their teacher, Balázs Juhász introduced himself on the piano. He performed a well known piece by Claude Debussy, Clair de Lune which is the 3rd movement of Suite Bergamasque and was composed after the poem of Paul Verlaine. 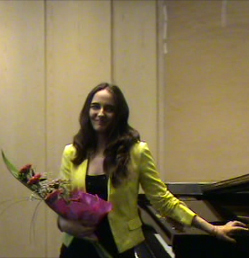 Ivet Gyöngyösi who used to play several times in this memorial house, she gave us now a portion of her art asked by Hangrózsa Piano School. Ivett won many nationwide and international piano competitions, here are some of her prizes. She was awarded the Cziffra Prize on the George Cziffra International Competition held in Vienna, 2009, where she was the youngest participant. The Prima Primissima Foundation gave her the Junior Prima Prize in 2012, which is one of the greatest recognitions given to young artists. Those artists who choose a grand piano mady by Steinway & Sons can earn the title Steinway Artist. Ivett plays on a Steinway Model M at home for more than 10 years and she was awarded the title "Young Steinway Artist" in 2010 when she was younger than 18. Tha Hungarian public could meet her on the "Virtuosos" Talent Show organized by MTVA in 2014, where she won the group of "Adults". At the present time she is the student of Franz Liszt Academy of Music, her teacher is Kálmán Dráfi. She prepares for the autumn turn of the 17th International Frederic Chopin Piano Compettition in Warsaw, she played now three pieces by Chopin: Ballade in A flat major (Op. 47.), which was composed after the poem of Adam Mickiewitz, and two etudes (Op. 10. No. 8. in F major and Op. 25. No. 10. in B minor). The public became fascinated.

The surprise guest artist of the concert was Sándor Csipkés bar pinist who awarded the pronz prize of the Bar Pianist Competition held in Cafe New York, in 2014. Sándor gave many full-house concerts, he is preparing now for the matriculation to Franz Liszt Academy of Music, jazz piano. Finishing the concert he played his improvisations on a Hungarian folksong, with a lot of humor.
After the concert the audience could visit the memorial house where they got in touch whith Bartók's former living and working rooms, original furniture and personal belongings. All the participants returned home with a wonderful experience, even the weather was helpful for conversations in the garden of Bartók's villa.